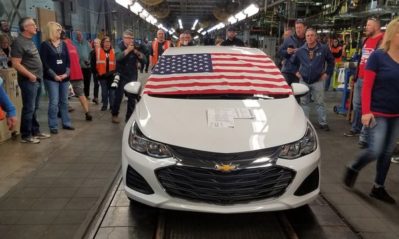 Last week, General Motors’ Lordstown, Ohio plant produced the last Chevy Cruze before its shutdown as part of a closure of five North American GM plants by 2020. The shutdown means layoffs for 1,700 workers, with a larger plan to lay off 14,000 employees overall. The justification for the closure included poor sales of the cars produced there, as GM is shifting to invest in greener models.

In an opinion piece, PVMI member Susan Helper blames both GM’s practices and U.S. public policies for the shutdown. She expresses concern that GM is giving up the capability to produce an entire class of vehicles, and that they have not developed the ability to produce different models on the same assembly lines like other automakers. She also questions the decision to lay off workers rather than retraining them to fit the company’s new needs.

Helper writes that the renegotiated NAFTA has played a role in the current trend of plant shutdowns, as automakers can take advantage of lower Mexican wages rather than domestic labor. Lack of governmental support for efficient vehicles has also made it less profitable for companies to produce green cars at plants like Lordstown.

“We can’t easily cure GM’s mismanagement and its undervaluing of its own people. But we can adopt public policies that lead in a different direction,” Helper concludes.